What is a college education worth to you?

What is a college education worth to you? 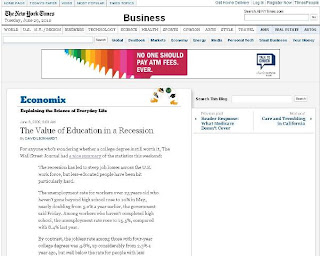 My colleague Eileen Snyder, Supervisor, Retention, recently shared an interesting post that she came across on The New York Times Economix blog. It’s called, “The Value of Education in a Recession.” Despite the fact that it was published in 2009, I believe its message still holds true today, so I wanted to share it with you here.

David Leonhardt’s post makes some important points that are relevant to students who are considering whether going back to school is worth it, especially in the face of climbing costs of education and a challenging economic environment. However, it might be that this “great recession” will show us exactly how valuable an education can be. As Leonhardt puts it, “On a relative basis, a college education has never been more valuable.”

Leonhardt references a Wall Street Journal article that examines how college-educated individuals have fared in the recession as compared to their less-educated counterparts. Jobless and unemployment rates as well as the pay gap all point to one thing — an education is still a valuable asset! I’ll leave you with this thought from Leonhardt:

“Four-year-college graduates made 54 percent more, on average, than people who attended college but did not graduate. Fifty-four percent!”

Click over to the post to read it in its entirety. What do you think about the long term value in obtaining a degree?

1 thought on “What is a college education worth to you?”